It’s been a few weeks (and a few books) since I finished the epic conclusion to D. Wallace Peach’s fantasy series, The Rose Shield, and naughty me hasn’t yet written the review this book – nay, this series – deserves. So, without further ado…. 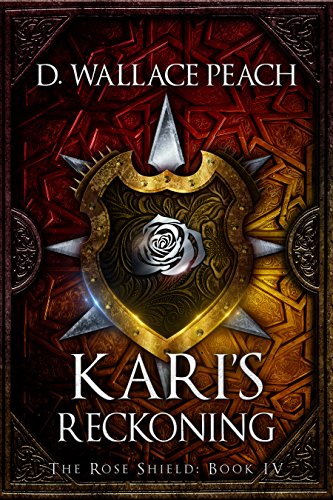 This – the fourth book and conclusion to the Rose Shield series – delivers action, intrigue, emotional sucker-punches, surprises, and a solid satisfying ending to a wonderful adventure series that has largely followed protagonist Catling and her struggles in a world of politics and influence.

In this installment, Peach really brings home the themes of power, morality and free-will that she’s toyed with throughout the series, and not a single character comes through the battlefield of the series without scars – be they physical or emotional… or both.

The power struggle becomes the epicenter of conflict in Book IV, with multiple players vying for control of Ellegeance. This struggle, and the notion of slavery are poignantly explored by Peach who drops powerful nuggets of wisdom into her narrative such as this; “He spoke of choices from a position of power with nothing to lose. Ask the powerless about their choices, and the answer will reflect their willingness and tolerance for suffering.” – from “Kari’s Reckoning (The Rose Shield Book 4)” by D. Wallace Peach).

However despite the human battle for power and dominance, it’s Peach’s world itself that becomes a major player in Book IV. The sentient, mystical energy (the Kari) that comprises Peach’s world, manifested as Raker’s Goddess, asserts its power and the absolute need for order and balance in the world. I can’t help but notice the similarities in Peach’s abused world. and the uprising of the Kari, with the state of our own world today and the undeniable presence of climate change – or, if you will, nature fighting back.

There were moments of total shock and horror (especially mid-way through the book as the Queen of Ellegeance faces marriage to the Cull Tarr overlord, Tull Airon), but ultimately I was left completely satisfied with the conclusion to this wonderfully rich, brilliantly written series.

If you haven’t yet looked into The Rose Shield series, I strongly urge you to get out there and get yourself a copy. This is intellectual fantasy at its best.