I have finished, for the second time, The Book of Jhereg, by Steven Brust, which is actually three novellas in one book. I am a HUGE fan of this book; I have rarely come across such intelligent, wry, writing, and such intricately clever plotting. 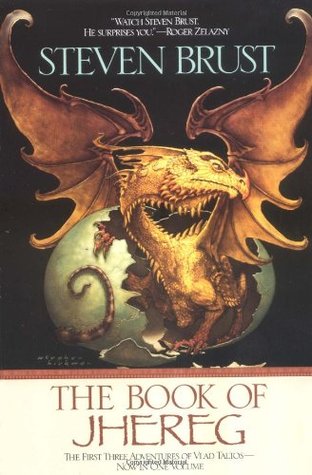 The Book of Jhereg is the first in a series that follows professional assassin, Vladamir Taltos, in a world where he – a human – is a scorned species, looked down upon by the dominant species, Draegarans. Vlad is an unusual character in that he identifies as human – or Easterner – but does not champion the Easterner cause. Instead, he’s a member of one of the Great Houses of the Draegaran lords – the House of Jhereg – he practices Draegaran sorcery and has best friends who are elite Dragon Lords. However, he only became an assassin in order to kill Draegarans whom he proclaims to hate. He also practices Eastern witchcraft, and married an Easterner who hates Draegarans as much or more than he does.

See where this is going? To say Vlad is a complicated, contradictory character is an understatement… and therein lies the depth and humanity of this character. He’s a flawed man, plagued with neuroses, paranoia, and sometimes, cruelty. But he’s also incredibly intelligent, affable, and, yes, lovable. All in all, Vlad is one of the most real characters you’ll ever read.

The novellas in this book follow three separate adventures in Vlad’s lifetime, though the three novellas are not laid out in chronological order. In fact, author Brust himself has said he’s not really sure which order a reader should jump into the Taltos Series. I found the way these three novellas are laid out provides a pretty good explanation for who Vlad is, and how the world works – despite the first tale – Jhereg – not being chronologically Vlad’s first adventure.

The first two novellas in this book – Jhereg and Yendi – offer a good grounding in the world Brust has created, and are set out as detective noir stories. The third novella – Teckla – changes pace somewhat and becomes much more of a personal story about Vlad and his relationship with his wife Cawti, and, ultimately, his contradictory relationship with himself. All three are very good novellas, but the first – Jhereg – really shines. I have not yet read the remaining Taltos series but I understand the writing, plotting, and even the genre style of each book is as vast and different from one another as is possible coming out of the same writer.

I strongly recommend The Book of Jhereg to fantasy readers, fans of detective noir stories, or those who love an intelligent bit of writing. It helps if you have a quirky sense of humour also! This is a great series opener, and there are many, many more to come in the Vlad Taltos universe.

The making of a horror novelist.